In Appreciation of… Socrates 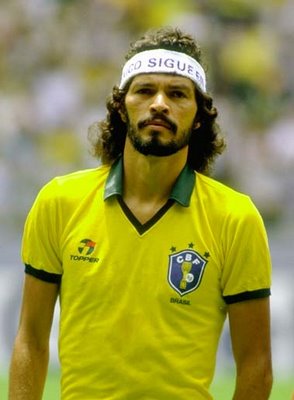 Football doesn’t have any great characters these days. The increased professionalism of the game, with its emphasis on athleticism over skill and hard running over creative intelligence, has produced a generation of footballers remarkable mostly for their pathological dullness. David Beckham? Steven Gerrard? Useful enough players I guess, but hardly likely to leave you breathless with some mesmerising bit of match day inspiration. It’s even worse when they’re off the pitch. Stick a microphone in front of them and they’ll struggle to articulate a complete sentence, let alone provide a memorable soundbite. An interview with a guy like Michael Owen leaves you with the uneasy question of whether somebody could really be that emotionally detached without being a cyborg or a closet psychopath. That’s modern footballers for you. Good at chasing around after a pig’s bladder and buying sports cars, but as dim as a bowl of porridge and just about as charismatic. The hell with modern football I say. The 70’s and 80’s were where it was at. Back then there were some real renegades. And you had some teams who could play with real style. I’ll take a coke-addled half-bonkers Argentinean midget as the best player in the world over some new fangled pampadoured designer clothes hanger any day of the week. Or how about Socrates, the chain-smokin’, beer swillin’ leftist revolutionary and anti-athlete, who was just about the coolest guy ever to kick a football.